On October 26, 1942, a convoy of five cargo ships and four military ships were making their way across the baltic sea to Sweden. One of the vessels were S/S Betty H which carried ore for the arms industry. She was 94.3 meters long and 13.4 meters wide and had a tonnage of 2478 GRT. She carried 23 crew members. 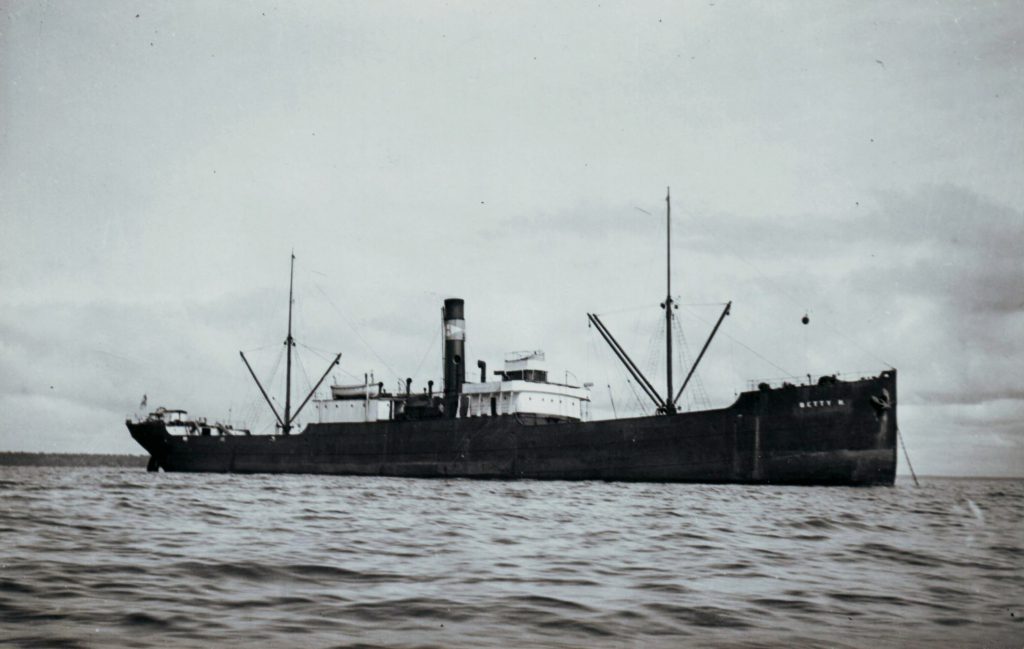 At 12:07 October 26 she was hit by two torpedoes by the aft cargo hold and she went to the bottom in just over a minute. Shortly before the ship disappeared the boiler exploded and parts of the bridge was floating for a brief moment on the surface before the complete ship disappeared into the depth. 11 crewmen were killed and 12 were rescued to the remaining convoy.
The Finnish submarines Vetehinen and Iku-Turso took the next four hours up the hunt for the then-unknown submarine before it disappeared south of Lågskär. The submarine behind the attack on the convoy was the Russian Shtsh 307.
During the late summer of 2006 the Åland maritime historical society went out to search for the sunken Betty H. After many days of searching the group found what they thought was the wreckage after Betty H at a depth of 75 meters. When the first dives later was accomplished, by four of the members of the society, the identification was still unclear since only the bow and pieces of amidships could be investigated.

A ship’s bell was found on the foredeck with no visible name, and part of a name could be inferred on the port side of the ship. In June 2007 the society went out to sea once again to try to find some answers and the definite identification of the vessel. On June 11 2007 they confirmed the identity of S/S Betty H, with home port of Pori, after detecting the name in the stern. The wreck of S/S Betty H and the final resting place of its 11 crew members had finally been found.
The wreck rests at the depth of 75 meters on a flat bottom without noticeable heel and is very heavily ravaged by the torpedo hit and the boiler exploding during the sinking. The stern and the bow is completely intact and much details yet remains to found on the wreck.